PROVIDENCE, RI (January 5, 2022) — The Providence Water Supply Board performs infrastructure work and partial lead service line replacements in a way that disproportionately increases the risk of lead exposure from drinking water for Black and Latinx residents, contrary to its responsibilities under the Civil Rights Act of 1964, according to a group of health and environmental justice organizations. 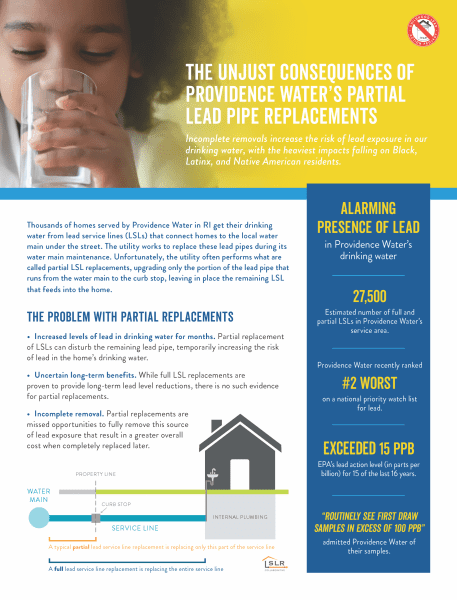 Lead service lines—lead pipes that connect the water main under the street to individual homes—are the greatest source of lead in drinking water. Exposure to lead contributes to serious health effects in all age groups, especially in infants and children. While lead paint is the most significant source of children’s lead exposure, lead in drinking water is an important contributor, especially for children reliant on infant formula.

Providence Water has more than 27,000 full or partial lead service lines in its service area and has exceeded the EPA’s actionable level for lead in water for 15 of the last 16 years. People of color, renters, and families in poverty are more likely to live in homes serviced by these lead pipes, according to a U.S. Government Accountability Office report.

The only way to effectively protect people from this source of lead contamination is to completely remove lead pipes from the ground. However, Providence Water routinely conducts partial lead pipe replacements during its infrastructure work, disturbing water mains and leaving in place the portion of the lead pipe that runs from the property line to the home. EPA’s Science Advisory Board has found that partial replacements increase the risk of lead contamination, with no evidence they are “reliably effective in reducing drinking water [lead] levels” in the long term.

To replace lead service lines completely, Providence Water requires that homeowners pay to replace the portion that runs under their property, at a cost of up to $4,500, which can be financed through a 10-year loan program. However, if property owners cannot afford the loan or opt out for other reasons, Providence Water still continues with its infrastructure work, replacing only the portion of the pipe under the street. Once Providence Water’s partial replacements happen, residents face a continued risk of exposure to lead from the pipes that remain.

“All families deserve lead-free drinking water, regardless of race, class, or any other factor,” said Childhood Lead Action Project Executive Director Laura Brion. “Right now, ProvWater will only fully replace lead pipes for property owners with enough money to pay out of pocket or take out a loan. This amounts to obvious race and
class discrimination and needs to stop.”

The City of Providence has acknowledged that communities of color in the city are “disproportionately low-income, residents in neighborhoods with the lowest property ownership rates, and experience higher rates of cost burden.” As such, Providence Water’s practice of requiring owners to pay to avoid the harms of a partial
lead pipe replacement creates disproportionate health impacts on Black and Latinx residents, who tend to have less of an ability to pay for a full lead pipe replacement than their White, often wealthier, counterparts.

Under Title VI of the Civil Rights Act of 1964, any organization that receives federal funds cannot discriminate—even unintentionally—on the basis of race, color, or national origin in the services they provide. As a recipient of more than $90 million in Drinking Water State Revolving Funds since 2015 and a $6.4 million Water Infrastructure Improvement for the Nation Act grant in 2020, Providence Water’s discriminatory practices need to stop.

The complaint calls on the EPA to investigate Providence Water and mandate that the utility take action to address these discriminatory practices. The easiest way to do this is for Providence Water to conduct full, instead of partial, lead pipe replacements during its water main infrastructure work for all residents at no cost to property owners. The goal is not only to stop partial replacements but to fully eliminate lead service lines throughout the system.

“Too many utilities conduct infrastructure projects that force a difficult choice on families. It doesn’t have to be this way,” said Tom Neltner, Senior Director of Safer Chemicals at the Environmental Defense Fund. “States such as Michigan, Illinois, and New Jersey have banned this practice to protect residents who lack the resources to protect themselves. Utilities need to stop the discrimination and stop partial LSL replacements.”

Today’s filing is the latest in a series of public calls from the Childhood Lead Action Project’s Lead-Free Water RI Coalition for an equitable, statewide plan for full, free lead pipe replacements for all Rhode Islanders.“This complaint underlines the importance of ensuring the state does not repeat past mistakes,” said Childhood Lead
Action Project organizer Devra Levy. “We’re calling on Providence Water to do full lead service line replacements and to do so with the input of communities most affected by these ongoing discriminatory practices. RI has a unique opportunity to enable not just ProvWater but every water utility in the state to do the same. The money is there, we just have to make sure it’s spent right.”

The National Center for Healthy Housing (NCHH) is a leading national nonprofit dedicated to transforming lives by transforming housing. Since 1992, NCHH has served as a highly regarded and credible change agent, successfully integrating healthy housing advocacy, research, and capacity building under one roof to reduce health disparities nationwide. Follow NCHH on Twitter (@NCHH), Instagram (@nchhorg), or LinkedIn, become a fan on Facebook, or subscribe to NCHH’s YouTube channel.