Home:Build the Movement:Find It, Fix It, Fund It: A Lead Elimination Action Drive

Introducing Find It, Fix It, Fund It

In the wake of the Flint lead water crisis and increased national will to address the problem, NCHH and the National Safe and Healthy Housing Coalition have launched a bold new drive to eliminate lead poisoning. It’s simple yet comprehensive: Find lead hazards, eliminate them, and build the political will to create key public investments and policies to do so.

Find It, Fix It, Fund It has grown to include over 150 members. See who’s joined the drive so far. 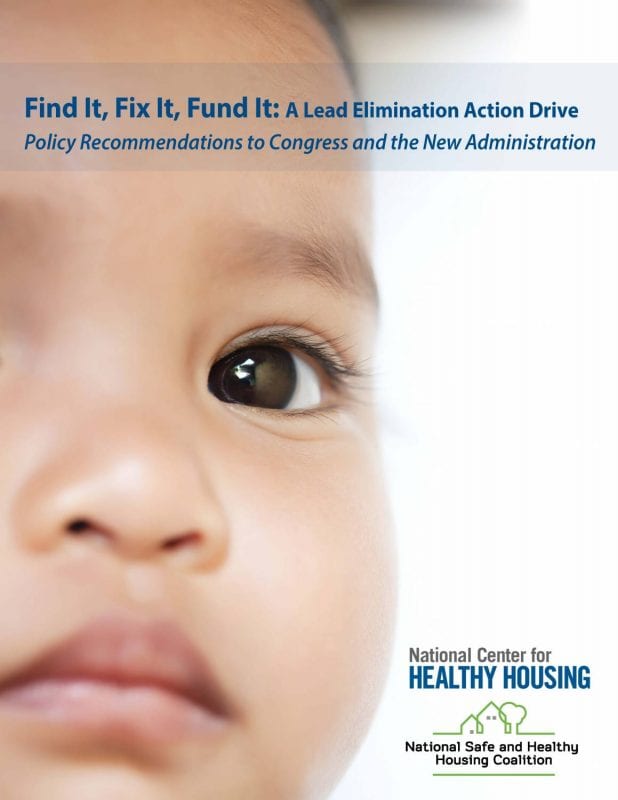 Find It, Fix It, Fund It: A Lead Elimination Action Drive: Policy Recommendations to Congress and the New Administration

NCHH and the National Safe and Healthy Housing Coalition are leading initiatives to eliminate lead paint hazards and dramatically increase lead poisoning surveillance and home-based follow-up services and will support allies and partners in eliminating lead hazards in water and other sources.

Over 50 recommendations for Congress and the Administration, written by Find It, Fix It, Fund It members and released in February 2017.

Talking points to accompany the recommendations.

A declaration supporting the Find It, Fix It, Fund It principles signed by over 300 attendees at the Lead and Healthy Housing Conference in Albuquerque, New Mexico, on May 5, 2016.

Find It, Fix It, Fund It National Roundtable

The National Roundtable meets on an ad-hoc basis.

For more information on the National Roundtable or Find It, Fix It, Fund It, please contact Sarah Goodwin.

The National Center for Healthy Housing’s core principle for lead advocacy is to promote primary prevention, leading to the elimination of exposures and thus the elimination of childhood lead poisoning. Until we achieve that goal, we will also continue to press for urgently needed follow-up services for children impacted by lead.

Preventing exposure to lead-based paint, dust, and soil hazards requires robust support of all three legs of the stool for successful government action: the CDC to monitor children’s blood lead levels, HUD to control lead hazards, and EPA to set standards based on the most updated science.

NCHH leads the national effort to:

NCHH plays a major role in efforts to: