Home:Blog:Will the Children Lead Us Out of Lead? 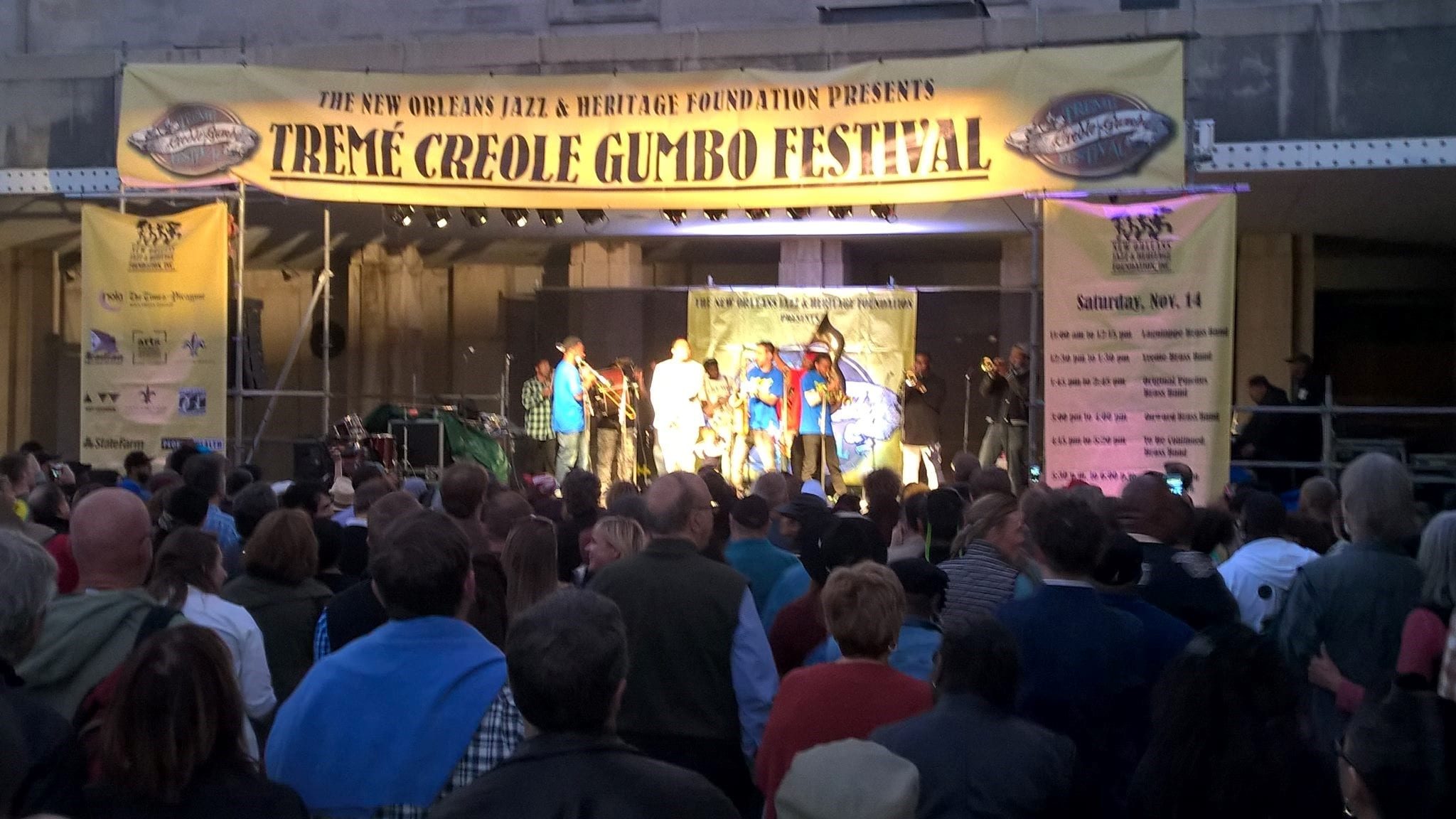 Will the Children Lead Us Out of Lead?

Note: This is the third in a series of mini-grant awardee blogs for National Lead Poisoning Prevention Week. You may also be interested in parts one, two, and four.

This year’s Tricentennial celebration of New Orleans won’t highlight its equally long history of lead poisoning even though there will be significant imagery of beautiful leadened historic neighborhoods and Mardi Gras beads. Also not included will be the number of children who still suffer higher lead levels than Flint’s. It is assumed that they may also be poisoned from sources at playgrounds, schools, yards, and the even more ubiquitous tiny amounts of lead from lead water service lines. 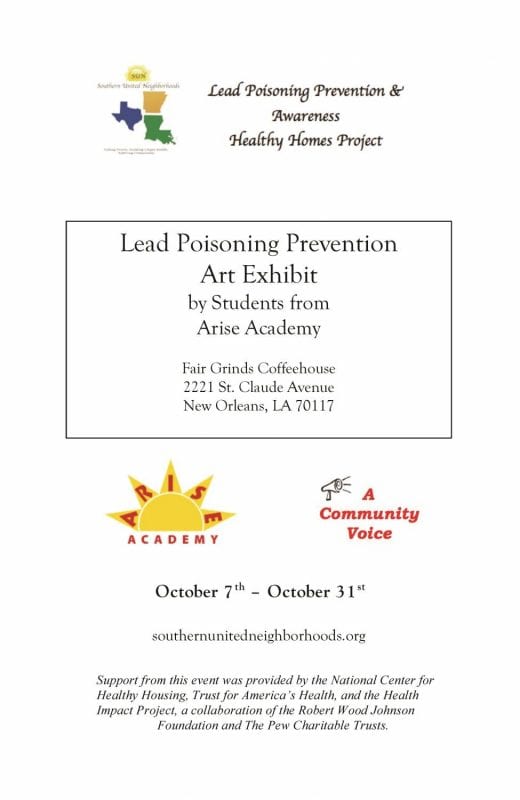 Suffering with the minimal to nonexistent efforts by city and state officials to improve blood lead testing and prevent lead poisoning, it has been on the backs of local experts and nonprofits to raise the issue of lead and fight for changes in policies. The financial burden of preventive efforts has also been on the residents’ backs and cash-strapped nonprofits to do what they can to educate residents, rehabilitate housing stock, install water filters, and keep children away from poisoned playgrounds.

Previously, Southern United Neighborhoods’ partnership with NCHH was to develop a lead poisoning prevention program that in part involved an art project with middle/junior high school students. Through the education effort, students created their own visions and interpretations of what they had learned about lead poisoning and its impact on individual and community health. Their images ranged from peeling paint on older homes to Mardi Gras beads, from lead-poisoned toys to entire homes filled with sources of hazardous lead.

Working with the young art students was both a unique and heartening experience that illustrated how receptive young people are to both learning how to protect themselves from lead exposure and to taking that message home to their caretakers and to their peers. Their willingness to spread the message should give us all a sense of renewed hope that one day youth may lead us out of here, and that we can eradicate lead poisoning in New Orleans and throughout the country. We will continue to provide mechanisms through which they can work on this in the community.

The NCHH project with Southern United Neighborhoods spawned a recent lead poisoning prevention survey in the Tremé neighborhood of New Orleans. NCHH’s commitment to healthy homes has always inspired our work. Their support and invaluable technical assistance on this project expanded our capacity to engage with and educate more residents and provided us with new and effective tools for successfully engaging with the media.

Theoretically the city’s second oldest neighborhood, Tremé was also the first main neighborhood of free people of color. Historically a racially mixed area, it remains an important center of the city’s African-American and Créole cultures, especially the modern brass band tradition. With the aim of establishing a new benchmark for home assessments that goes beyond the tradition of targeting families with children under six, the project will engage and educate residents of all ages.

According to the Robert Wood Johnson Foundation’s Commission to Build a Healthier America, life expectancy in the Tremé neighborhood – only 55 years – is the lowest in the city, compared to 80 years within New Orleans’ more affluent neighborhoods. Could Tremé’s higher mortality rate be based on lead poisoning and not some other amorphous rationale related to residents’ education, et cetera? Why wouldn’t lead poisoning have something to do with this reality, as the housing is among the oldest in the city? In addition, a grove of oak trees along the neutral ground of Claiborne Avenue was bulldozed in 1968 to make way for a freeway through the heart of this neighborhood, bringing more pollution, and the increased traffic deposited more lead particles in our soil.

The adverse effects of lead poisoning to health are numerous and well known, including damage to organs that could result in heart disease and kidney failure. High rates of violent crime all over New Orleans also contribute to our lower life expectancy. The links between lead poisoning and impulse control, aggressive behaviors, and violence are even more worrisome for this neighborhood.

Children are active participants in this project, examining their own bedrooms and play areas for hazards, collecting soil samples and bringing information on available testing opportunities for their playgrounds and water at their schools. Visits to residents’ homes with lead poisoning prevention materials involve the children and grandchildren: They learn how to perform basic lead assessments of their spaces and how to collect lead samples. SUN has canvassed and mapped the area, collected soil and water samples, and spoken with Arise Academy about participating in an art project to display project findings. Residents eagerly await their lead test results. This is a multiyear project that will provide a detailed assessment of lead of this troubled neighborhood.

Research results will show homeowners the emphatic need to test their soil and filter their drinking water. We hope that this pilot project can be expanded into other neighborhoods in New Orleans and across Louisiana to help homeowners with little disposable income to improve the health of their homes.

Below is a sampling of student-drawn art from Arise Academy, which was displayed at a coffee house in New Orleans. The kids demonstrated an understand of lead hazards, and their art helped to educate the public about lead hazards as well. See the full program here. 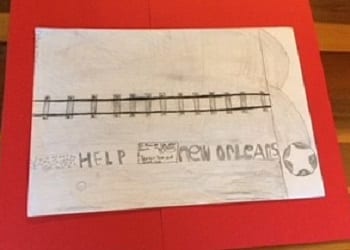 “That lead is around train tracks and old gates have lead on them too. It floats in the air even though we might not be able to see it but it’s there. I want to let parents know that while they are letting their kids play by train tracks, and they are inhaling all the lead that’s in the oxygen and it is very dangerous and can kill innocent kids.” 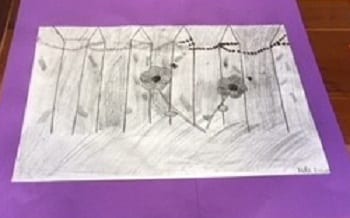 “My art work shows the paint coming off the fence and getting in the soil where the flowers are, as well as the Mardi Gras beads. When people put Mardi Gras beads on fences, after a while the fences get lead poisoned and get in soil and the plants get the lead poison too.” 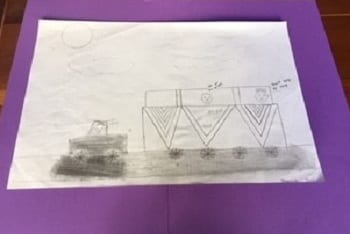 “A parade that helps people be safe from lead. Since a parade has a lot of people, it would be a great time to tell people to get rid of lead and how to stay healthy.”

Marie Hurt is the executive director of Southern United Neighborhoods (SUN), a 501(c)(3) tax exempt organization specializing in outreach and education programs especially related to lead hazards, affordable housing, and healthy homes. Founded in March 2010 by Ms. Hurt and a team of community leaders, SUN’s mission is to address the adverse conditions of poverty, discrimination, and community deterioration by developing and implementing programs that improve the lives of low- to moderate-income families. Ms. Hurt has over 20 years of experience in working with low- to moderate-income families and has successfully implemented outreach programs related to lead poisoning prevention, healthy homes, affordable housing, home repair, and entitlement programs such as SNAP, EITC, CHIP, and Medicaid.