by the American Lung Association Staff.

The air we breathe has a profound impact on our health – not just indoors but also outdoors. So how do we find out about the quality of the air we breathe outside our homes, and what can we do to protect ourselves? The American Lung Association just released a new report, “State of the Air” 2019, that helps answer those questions.

This is the 20th annual report from the Lung Association, and it uses official air quality monitors across the country to calculate letter grades for counties and rankings for cities for their levels of two of the most widespread types of harmful air pollution, ozone and particle pollution. You can look up your own community’s air quality by state or by ZIP code at www.lung.org/sota.

Over the two decades of this report, the overall trend has been one of great improvement in levels of these two pollutants across the country. Thanks to the federal Clean Air Act, the air is much cleaner than it used to be. However, we now know that climate change is starting to undo the nation’s progress. 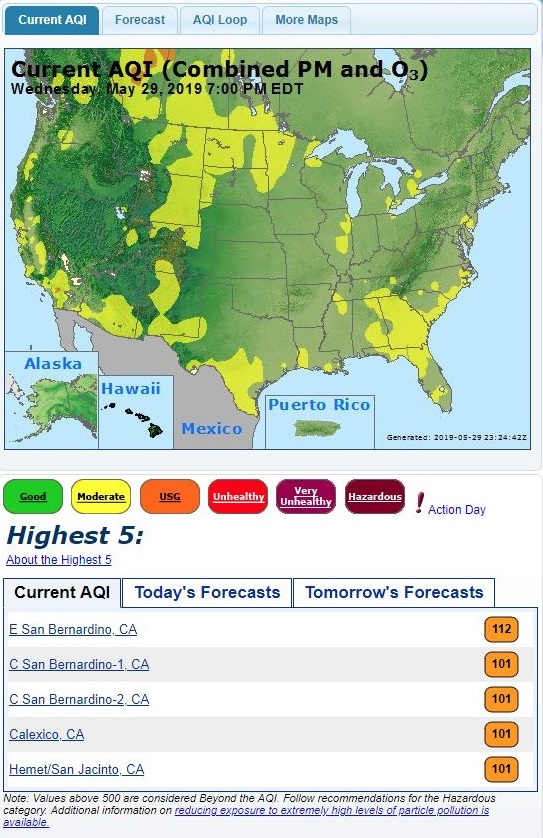 Above is a detail from the EPA’s AirNow site. “AQI” equals “air quality index.”

Climate change is fueling these worrisome findings. Ozone pollution forms when emissions from industry, vehicles, and other sources react in the presence of heat. More heat from a changing climate means more risk of unhealthy levels of ozone. And particle pollution can also come from industry and transportation but also wood burning and wildfires. Climate change is enhancing conditions for dangerous wildfires, and that’s leading to harmful wildfire smoke that puts health at risk far beyond the area of the fire itself.

So, what can you do? First, keep an eye on your community’s air quality, especially if you fall into one of the at-risk categories above. The Environmental Protection Agency’s (EPA) official air quality website, www.airnow.gov, gives color-coded daily forecasts that you can use to make decisions about how much time to spend outdoors on any given day.

Second, join the chorus calling for the Administration and Congress to clean up air pollution and address climate change. Our elected officials must adopt science-based solutions to reduce emissions that are causing climate change and to ensure that no community near a polluting source gets left behind. Take action here.

May 27th, 2019 | Posted By American Lung Association | Posted in Blog
Another Year, Another Disastrous President’s Budget for Healthy Housing
New Funding Awarded in Nine Localities to Prevent and Respond to Childhood Lead Exposure