The Choreography of Collaboration

Collaboration seems to be the “motherhood and apple pie” of public health. It’s such an inarguably good idea that everyone can get behind the notion. Collaboration overcomes conflict, solves intractable problems, and saves money – or so we expect. If collaboration is so great, why isn’t it happening everywhere? The reality is that there are many barriers to collaborating across issue areas, between communities, agencies, and researchers, and at different levels of governance. Recognizing some of these challenges can help potential partners start off on the right foot…and potentially avoid problems along the way.

Since childhood lead poisoning is a “health issue with a housing solution,” collaboration between health and housing is essential to making progress in solving this problem, particularly at the local level. And although the world of lead poisoning prevention is full of effective collaborations between health and housing, many communities struggle to form and sustain effective partnerships. 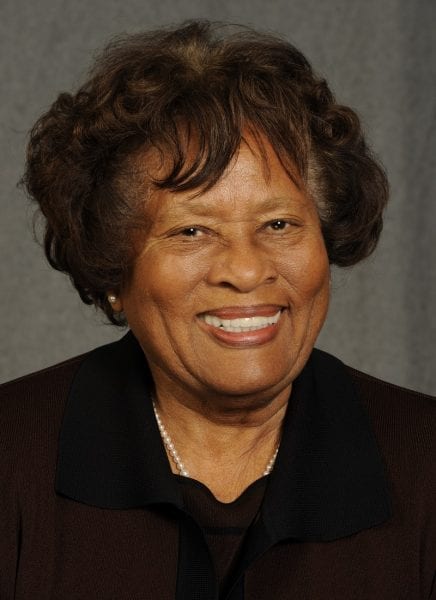 “Collaboration has been defined as ‘an unnatural act between non-consenting adults.’” Dr. Joycelyn Elders was appointed as to be the 15th U.S. Surgeon General by President Clinton in 1993. She later served on NCHH’s board of directors (2007 to 2019). Portrait of Dr. Elders by Lloyd Wolf.

In one of her more frequently cited quotations, former Surgeon General Dr. Joycelyn Elders quipped, “Collaboration has been defined as ‘an unnatural act between non-consenting adults.’ We all say we want to collaborate, but what we really mean is that we want to continue doing things as we have always done them while others change to fit what we are doing” (Backer 2003). That’s a pretty dismal view of the potential for collaboration, but it has a ring of truth.

Collaboration has become such a popular notion that people may fail to realistically consider their goals, barriers, and interests – as well as those of their potential partners. Most individuals face political constraints, conflicting incentives, competing priorities, and resource limitations. Given that, how can we initiate partnerships that are likely to be productive? One idea is to look closely at successful collaborations for lessons learned. 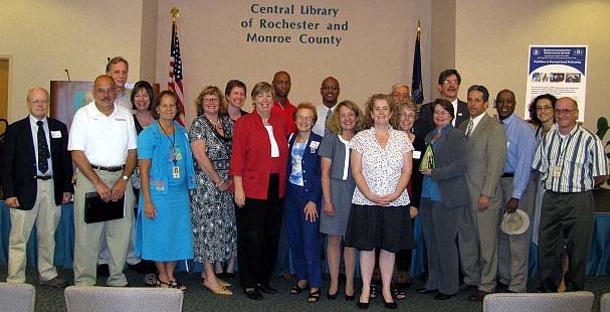 Members of the Rochester lead team in 2000.

Looking closely at the history of the Coalition gives a glimpse of the motivations, constraints, and impacts of some of the key partners in this effort. Who were they, how did they participate, and why? 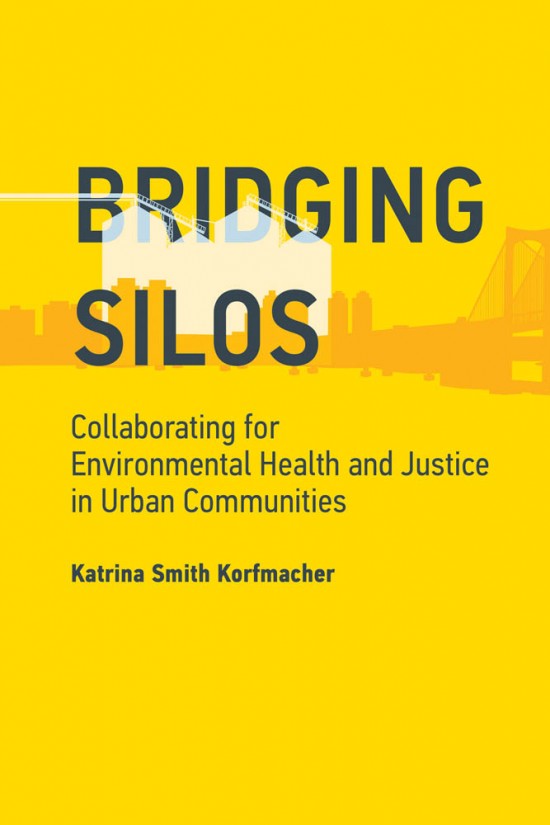 Dr. Korfmacher is the author of Bridging Silos (MIT Press).

These examples paint a kaleidoscopic picture of interactions rather than a single, cohesive collaboration pursuing a common goal in lockstep. Each Coalition member had an individual motivation to participate, institutional support (permission, encouragement, and sometimes directives from higher-ups in their organization), and a belief that partnering could accomplish their goals in ways that working alone could not.

The Coalition was mindful of each member’s goals and constraints. For example, government staff made important contributions to committees but never played leadership roles about Coalition strategies, position statements, or advocacy. Similarly, the Coalition’s science committee allowed academics to contribute their expertise without entangling them in the advocacy efforts of the Coalition. Rather than trying to engage every partner in collective action, the Coalition facilitated a wide range of small projects, communication products, and partnerships among individuals that matched their diverse motivations, incentives, capacities, and constraints.

So, what does this mean for individuals hoping to foster collaborations? The rich social science literature on collaboration among community groups, government agencies, and researchers in the field of ecosystem management offers some insight. In Making Collaboration Work: Lessons from Innovation in Natural Resource Management, Julia Wondolleck and Steven Yaffee describe collaboration as “a kind of awkward dance that none of us knows the steps to.” Their book concludes with a “message to individuals” that translates well to public health in general and to healthy housing in particular. Here’s their advice, paraphrased: 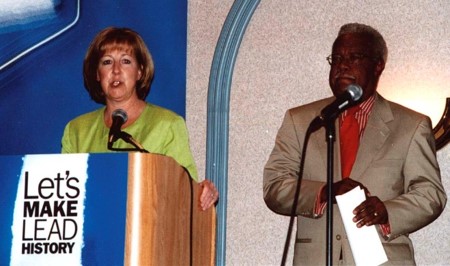 To extend their “awkward dance” analogy: Get to know your partner before you begin dancing, pick music you both like to listen to, start with some basic moves, and forgive your partner when they step on your toes – as you expect forgiveness when you step on theirs.

Although the Rochester Coalition to Prevent Lead Poisoning is widely hailed as a successful community effort, its collaboration has a complex history. There were many challenges, conflicts, setbacks, and mistakes along the way. It’s important to recognize that collaboration can be challenging and in fact is not always the most efficient, appropriate, or feasible approach. Telling the full story of collaborations – including the sidesteps, backsteps, and missteps along the way – may help future groups anticipate and avoid some of these challenges while setting realistic expectations so they don’t give up. 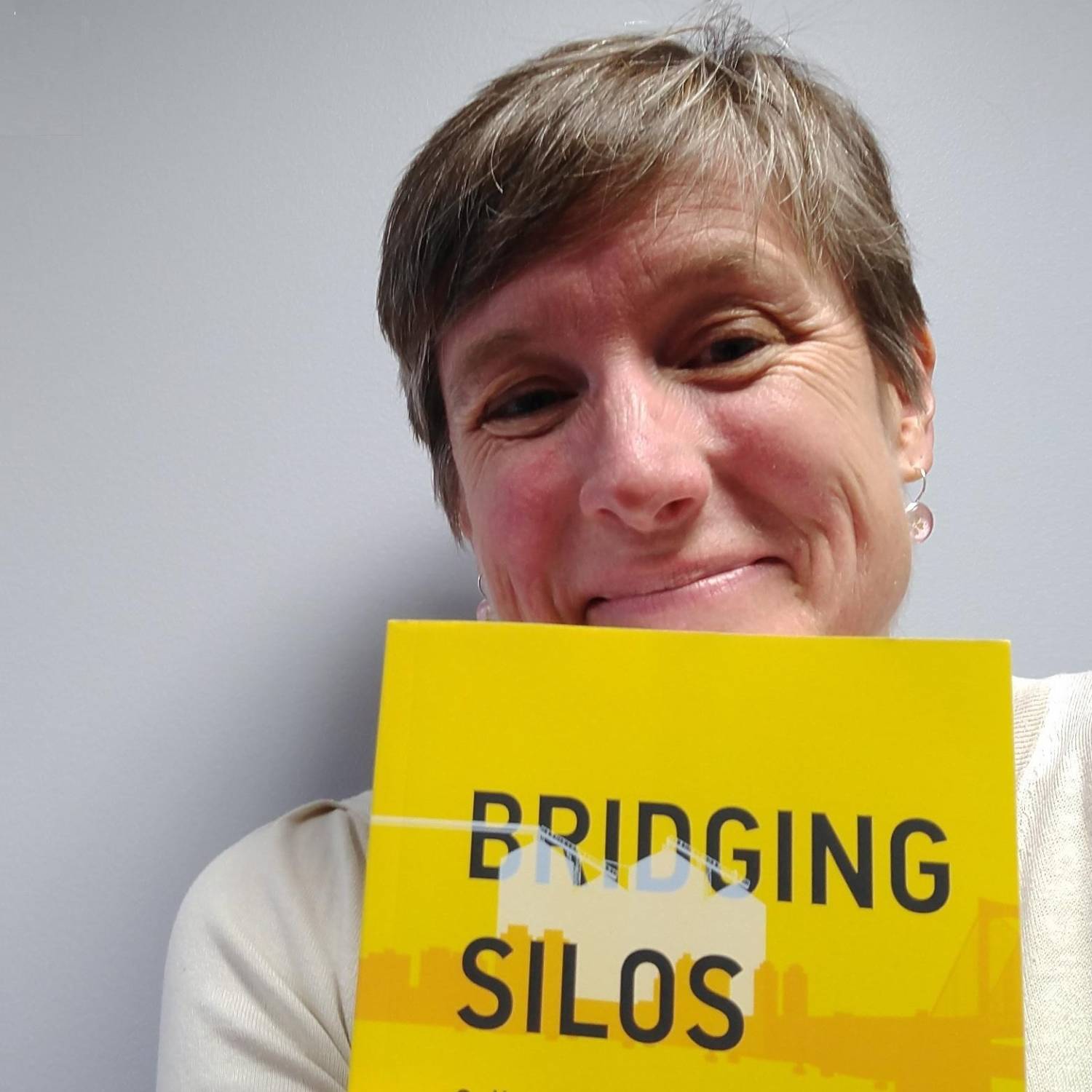 Katrina Smith Korfmacher, Ph.D, is Associate Professor of Environmental Medicine at the University of Rochester. Her recent book, Bridging Silos: Collaborating for Environmental Health and Justice in Urban Communities, explores the challenges, successes, and lessons learned about collaboration through three case studies (lead poisoning prevention in Rochester, New York; equity in the built environment in Duluth, Minnesota; and consideration of health in decisions related to the ports of Los Angeles and Long Beach). The book may be ordered or downloaded for free courtesy of MIT Press’ Open Access initiative. She loves contra dancing, a social folk dance where someone tells you what to do and makes you dance with every single person in the room.