The Dangers of Lead-Based Paint

Do you own or rent a property built before 1978? If so, you need to be aware of the dangers of lead-based paint.

Anyone can be poisoned by lead, and no safe level of lead in the blood has been identified. In adults, symptoms of lead poisoning include muscle weakness, pain, paranesthesia (“pins and needles”), nausea or vomiting, and diarrhea or constipation. Children are especially susceptible to lead poisoning because their bodies are still developing. When inhaled or ingested, lead can damage a child’s internal organs, brain, and nervous system, slow growth and development, cause problems with hearing, speech, learning, and behavior. Exposure to high levels of lead can lead to coma or death. In many cases, the child may not exhibit any obvious symptoms until after permanent damage has occurred.

And a little bit of lead goes a long way: It’s so toxic that the amount necessary to harm a child is invisible to the naked eye. Here’s an illustration: Imagine a standard sugar packet that you might pour into your coffee; now imagine that the sugar in that one packet was spread evenly across a football field. If that packet contained lead dust instead, then every part of the football field would be considered contaminated. 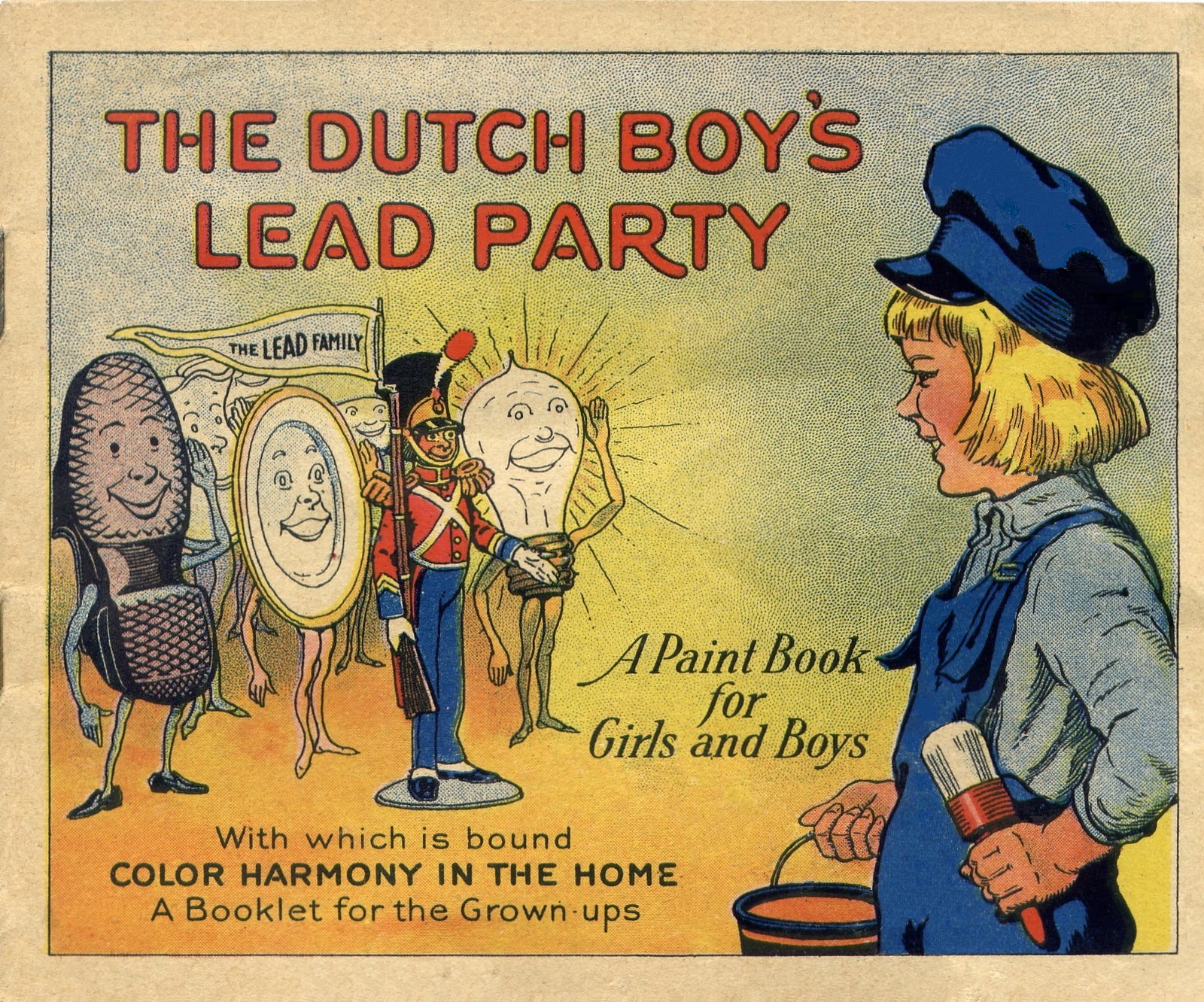 There was a time when lead was actually considered a selling feature, as evidenced by “The Dutch Boy’s Lead Party” coloring book, 1923.

Manufacturers added lead to their paint products to increase the paint’s durability, hasten its drying, and resist moisture (which causes the paint to corrode and break down). Unfortunately, all paint eventually wears down or flakes off as a result of friction, as with windows sliding in their frames, doors rubbing against jambs, and the general wear and tear that occurs on trim and casings. The federal government banned lead in residential paint products in 1978; estimates vary as to how many homes still contain lead-based paint somewhere, but the figure is well into the millions.

And while it’s been illegal to add lead to paint for residential use since 1978, there are still paint products being used today that can contain lead, such as marine paint, which is designed for use on boats but sometimes used by misguided homeowners on stoops, porches, and cabinets for its durability and ease in cleaning. The paint used in road markings may also contain lead, which may not seem like a cause for concern until you think about where the lead can go as it wears off the street.

From Paint into People

There’s a common misconception about how lead from paint enters the bloodstream. People sometimes picture babies in cribs in run-down homes eating large chips of lead-based paint that curl and flake off the ceiling above them. While that’s a scenario that could happen, it’s not the most likely avenue for lead exposure. As far as poisoning from lead-based paint is concerned, exposure can come from virtually any part of the home—the lead dust can be tracked from room to room or can drift through the air. One common source of exposure occurs as a result of children playing on the floor and picking up microscopic lead particles in the dust on the surfaces of their toys. As young children explore their surroundings, they often put their hands and toys (and everything else) in their mouths, and the lead particles go in as well.

Similarly, children love to play in windowsills, and this too is often a source of exposure to lead dust. The windowsill serves as a low, flat surface on which to play and a way to see the what’s going on outside from the safety of home, but it’s also an area that may not be cleaned as regularly as the kitchen floor and one where the paint is more deteriorated due to weather-related fluctuations in temperature and moisture, not to mention incremental but persistent damage that occurs as a result of the windows sliding open and shut for years. Windowsills are also sometimes targeted by teething children because the sills are situated at the perfect height. Compounding the issue is the fact that leaded paint tastes sweet, so it’s very attractive to young children for many reasons but a nightmare for the parents.

What to do—send the kids outside? On older homes, the wood siding may have been painted with a leaded product. As it weathers from season to season, particles of lead break loose along the perimeter of the structure, where they fall into the soil, so it’s important to be aware of the dripline and avoid setting up play areas (sand boxes, et cetera) near the exterior walls. And remember that a building with aluminum or vinyl siding now may have had painted wood siding in the past.

In future blogs, we’ll talk about more about lead poisoning and the “RRP Rule,” a major regulation intended to control it.

Learn about the Lead-Safe Toolkit for Home-Based Child Care, a new project to educate day care operators about potential sources of lead exposure.

Other Resources for Lead

February 12th, 2021 | Posted By Christopher Bloom | Posted in Blog, Lead Poisoning | Tagged lead exposure, lead paint, lead poisoning, lead-based paint, Public Health
Radon Gas: An Invisible Threat in Our Homes – Part 3: How You Can Reduce Your Risk
When Home Improvement Leaders Are Busted for Lead Violations, Does Anyone Learn Anything?