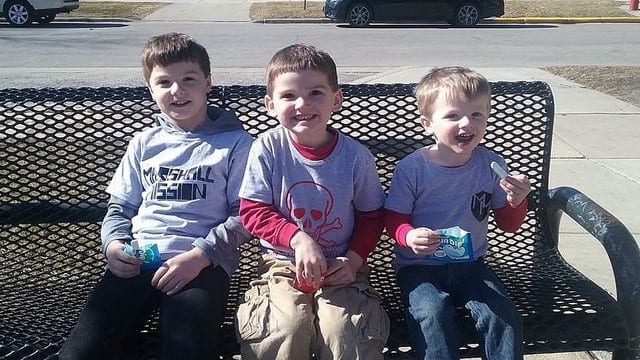 Every parent knows their child is special, even if just to them. But no one ever thinks it could happen to them: the doctor actually telling you that your child is “special.” But it happened. Not just once, but TWICE. The minute I heard the doctor tell me that my two-year old was potentially brain damaged, I wasn’t sure which emotion to address first. Should I be sad, angry, or heartbroken? Really, all I could do was feel love and compassion for my little boy as he was staring up at me wiping my tears. Without missing a beat, my three-year old said, “It’s going to be okay, Mama.” At that moment, I vowed to hold someone accountable for what my children were going through.

My older son, Jackson, was diagnosed at a routine pediatric checkup in February of 2015. “High lead levels?” How could that be possible? Well, we had just moved into our new home. Maybe our previous home had indeed had lead paint? We’d signed a waiver when we signed the lease. But at our new apartment, we had signed no such waiver – so it must be safe, right? Being that Jackson’s lead level was over 10, the local health department was ordered to do a home inspection to ensure that our residence was free from lead. After the inspection, the women educated us on lead safety precautions. None of which included lead paint. We were advised to:

Throughout our 45-minute chat, never once was PAINT OF ANY KIND mentioned. So we continued working with our (then) two-year-old son, Jackson, on lowering his lead levels. His levels got as high as 29 and finally, over the span of two years, dropped to where it finally sits at a level of 3. 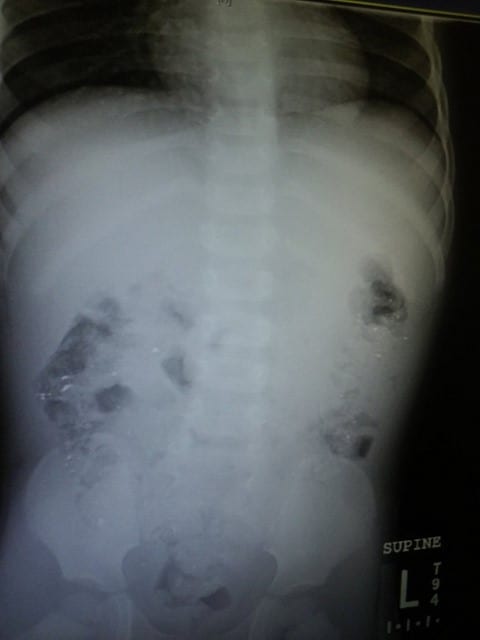 In March 2016, our nightmare continued when my younger son, Marshall, went in for his routine two-year checkup, and his lead levels too were elevated. This time, the lead levels were not just slightly elevated, as was the case with Jackson, but were ALREADY in the high 20s. Remember: An “acceptable” lead level on a healthy child is 5 micrograms of lead per deciliter of blood or below.* Marshall’s lead level continued upward into the 60s within a few short days. He was treated in the hospital with medicine (flown in from Flint, Michigan) pumped through an NG tube. We attempted to just break open the capsules and hide the medication in good-tasting foods – such as pudding, yogurt, ice cream, applesauce, et cetera… but he quickly tasted it, caught on, and refused to eat altogether.

So we had to figure out another way to medicate a two-year-old with a pill that smells like rotten eggs. (I brought one with me if you’d like to smell it…. Please, feel free….) I want you to understand why, as a mother, I would go to the doctor and request that they insert an NG tube in his nose, down his throat, and into his stomach to ensure that he would receive his medication. After eight intensive days, Marshall was released and we went home. I was trained in how to medicate and care for my two-year-old’s NG tube. That was the hardest summer of our lives. Trying to keep Marshall safe became the challenge we all accepted without a second thought.

Have you ever asked a two-year-old not to touch something? What’s the first thing they’re going to do…? Touch it, of course. Imagine telling a two-year-old that he cannot touch a plastic tube going down his nose into his throat and stomach. It crosses his entire face and goes behind his ear and is uncomfortably taped to his back. I’ll never forget the day he pulled his tube out and we had to call the home nurse to come put it back in, only to have him to pull it out again right in front of her. He did this four times. So four times, we had to hold that little boy down… and put a tube down his nose and throat, making sure that it was set in the right place in his stomach. It’s safe to say we were ALL distressed afterwards. 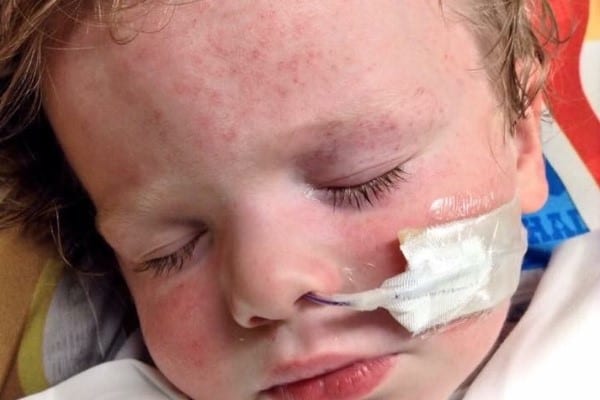 Marshall Szontagh, age 2, resting at last, with a nasogastric (NG) tube taped to his face.

For that entire summer we could not allow Marshall to be just Marshall. He couldn’t take a bath or go swimming. He couldn’t go to the park, out of fear of the tube displacing into his lung or getting pulled out. We were warned that if he were to vomit, the tube could come out of his mouth. So that wasn’t my biggest fear or anything. Our usual happy go lucky, active, curious, little explorer had to be followed and watched at all times. He could not run or jump or do anything any of us felt might be dangerous in any way, shape, or form.

Our happiest day came when we were finally able to remove his tube when his lead level was as low as 19. We continued to monitor it every three to six weeks, which has completely traumatized him from ever going to the doctor. As of June of 2018 – that’s two years after his poisoning – Marshall’s lead level is still as high as 9, which is still higher than we’d like to see. We want it to be below 5, but let it be known that THERE IS NO SAFE LEVEL OF LEAD!

We could never go back to the apartment where the boys were poisoned after Marshall’s diagnosis . Marshall endured the entire summer of 2016 with a tube in his nose. He was so brave and strong. I learned so incredibly much from my two-year-old that summer. He didn’t know anything about unsafe environments or how sick he was. All he knew was he had a yucky tube down his poor little nose, and he wanted to go home and see his brothers and his friends. Through all of this difficult time, Marshall’s questions were so simple and innocent. All he really wanted was to take his stuffed animals, take his brothers, go home, and see his friends.

From My Family…to Yours 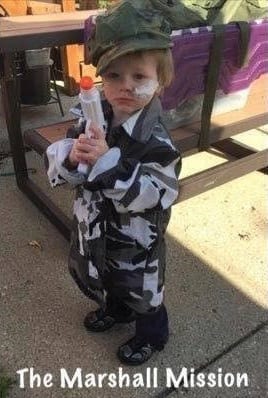 The Szontaghs started a GoFundMe campaign.

After a year of constantly seeking justice and getting nowhere, I decided to shift my focus. I think it’s just as important to educate parents like myself. I intend to focus on advocating, educating, and warning people about the dangers and risks of lead poisoning through my family’s story. We show parents how to recognize lead-based paint. We won’t stop until there is a change, and children are no longer being poisoned by this silent epidemic. The first question people usually ask is, “What is the first symptom of lead poisoning?” The first symptom of lead poisoning is no symptom at all. Thankfully, both my boys’ poisoning was detected early on due to routine pediatric lab work that revealed their elevated lead levels.

Living as a parent in Chicago, we face so many obstacles in keeping our children safe. I won’t even go into what you all already know are daily issues in our community. But now, I’m going to add to your list of things to worry about. Find out when your home was built. Any Chicago resident can call 311 to get a FREE kit to test their home’s water source for lead. Get those kids into their pediatricians and have their lead levels tested – and do it OFTEN! If Marshall’s blood had not been taken the exact time it was to notify us of his life-threateningly high levels. Who knows what could’ve happened? I cannot even bring myself to think about all the what-ifs. The only option I can see now for our future is to continue telling our story until a difference is made. If by telling this story right here, right now, saves even ONE child from going through what we have been through, I will honestly be one extremely satisfied mama.

*Editor’s note: Lead is not necessary to support any bodily functions, and any amount of lead detected in the blood is potentially hazardous. More research into low-level exposures is needed to understand how it can affect the central nervous system and other parts of the human body.

Related: The Szontaghs’ Story in the News 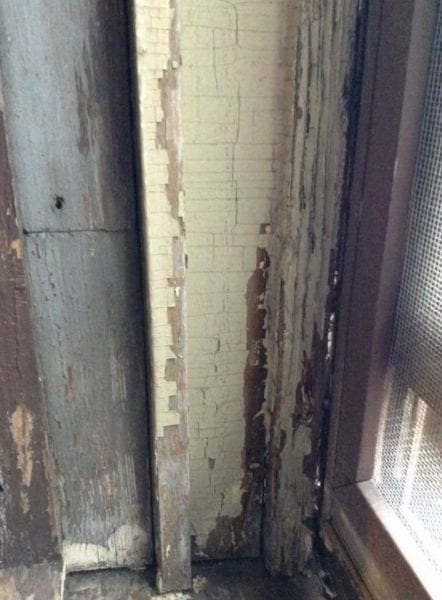 Ms. Szontagh’s blog tells the personal side of her family’s story, but the problems caused by lead hazards extend far beyond the health of the family itself. As demonstrated in the links below, lead hazards affect the family finances and credit rating, the reputation of the land lord, the time and expense of the legal system. Whether personally exposed to lead hazards or not, everyone in a community deals with its effects in some way .