The Fannie Mae Foundation created the National Center for Lead-Safe Housing (as it was known at the time) in September 1992, using a $5.2 million donation from its outgoing president, David Maxwell. At the time, the grant was the Fannie Mae Foundation’s largest gift ever. The purpose of the gift was to create a nonprofit organization that would represent, with the Alliance for Healthy Homes (a District of Columbia-based nonprofit organization) and the Enterprise Foundation (now Enterprise Community Partners) serving as parent organizations, the first national joint venture between affordable housing and environmental public health advocates.

Walter G. “Nick” Farr, a vice president with the Enterprise Foundation, was asked to lead the new nonprofit. Joining Farr as the deputy director at the fledgling organization was Dr. David Jacobs, a technical expert on lead-based paint safety. Prior to joining the National Center for Lead-Safe Housing, Dr. Jacobs had been a faculty research scientist at the Georgia Institute of Technology. The two men assembled a team of researchers, housing professionals, advocates, and others to chart the nation’s path to primary prevention of childhood lead poisoning.

Over the next few years, the Department of Housing and Urban Development (HUD) challenged the center to compose a definitive source of national technical guidelines for dealing with lead-based paint, the Centers for Disease Control and Prevention (CDC) asked the center to develop robust scientific studies in order to understand sources and pathways of lead exposure, and the Environmental Protection Agency (EPA) requested research to assess the hazards of lead-contaminated dust. Cushing Dolbeare, a preeminent affordable housing advocate and board member of both the new center and the Alliance for Healthy Homes, chaired a congressionally chartered task force in 1995 with a vision for making the nation’s housing stock lead-safe, demanding changes in state and local laws, regulations, and ordinances. 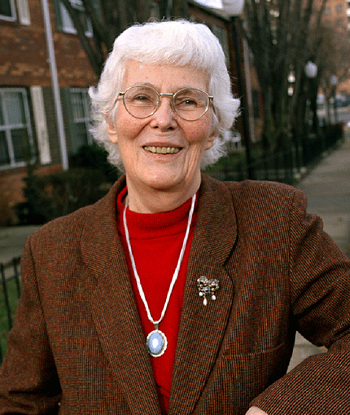 Cushing Dolbeare served on the boards of both the Alliance to End Childhood Lead Poisoning and the National Center for Lead-Safe Housing. Photo by Jim Harrison.

In 2001, the center was one of the first to recognize publicly that homes with lead paint problems typically posed several other health threats as well; they argued that addressing these hazards separately was both ineffective and inefficient.

Recognizing the need and their capability to address more home hazards than lead-based paint, the board of directors opted to change the organization’s name from the National Center for Lead-Safe Housing to the National Center for Healthy Housing (NCHH) in 2001. The larger scale inferred by the change of the organization’s name allowed NCHH to expand the scope of its mission significantly; it would now focus not only on lead, still a major priority, but also other housing-related health hazards and causes, such as asthma, mold, and integrated pest management. Still, NCHH’s core values and priorities remained unchanged: to find proven, practical, and cost-effective ways of protecting families from home health hazards, especially those at highest risk in older, low-income homes.

Nick Farr retired from the organization in 2001 but remained in touch with his friends and colleagues at NCHH until his passing in 2014.